Posted in Video Games by
pyropixie 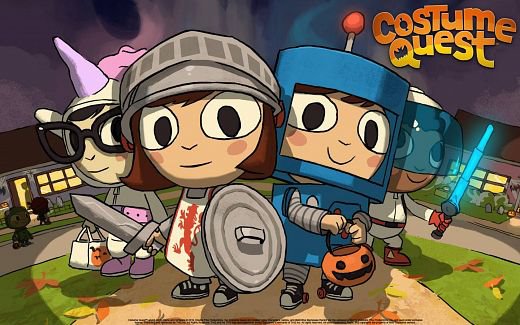 I know this game came out in 2010, but I just got around to downloading it yesterday after a recommendation from Richard. I played the demo and decided I could not live without it and punked down the 800 points. Dear Microsoft, why do you make it so easy to buy points? My bank account hates you. Sadly I played the demo on Richard’s Xbox, so I was unable to unlock all the achievements I gained while playing the demo, and had to start completely over on my own system.

The game takes place on Halloween. Fraternal twin siblings Reynold and Wren are new in their neighborhood and are asked by their mom to use their trick-or-treating to make new friends in the neighborhood. The player at this point chooses which sibling to play as. The two dress in their costumes, with the non-playable character dressing as a piece of candy corn and the playable character dressing as a robot. A monster with a sweet tooth sees the non-playable sibling, and kidnaps him or her. The player character must now save their sibling in time and be home before curfew.

I have a bad habit of skipping through story lines in games, so when I found out that I could not power through the dialog in the beginning, I found it rather frustrating, especially because I had to do it twice. I was quite delighted to find that my original starting costume is a ROBOT, heck yes! I find the flow and game play of the game a little clunky and jerky, and I find the turn based fighting a little weird. I also wish that there was map feature because as stated before, I am a completionist and want to make sure that I have explored every nook and crany of the game. All in all, I have only been able to invest about 2 hours into the game, and I am head over heels for it. I love the styling of the game, and the hoarder in me loves collecting candy and battle stamps. I can’t wait to check out Happy Wars that comes out this Friday for free for gold Xbox Live members.