Friday morning when I got into my car to head to work, my coolant light started flashing and my car made a weird grinding noise. On Saturday I took it to the dealership to have them take a look at it, since my old lady is getting well, old. I had the entire day to kill so Richard picked me up from the dealership and we went on all kinds of adventures. While waiting for him – I meandered over to Home Depot to check out paint swatches for a spice rack that I plan on turning into a toy display that I got at the Goodwill for a whopping 2 dollars. I am dreaming of a gradient color scheme, but I think I am overestimating my painting abilities – we shall see.

First we hit the bank so that I could deposit my paycheck and then Noah’s bagels for a delicious pretzel bagel. Those are so good, as long as they don’t over toast them. Richard asked me if I had ever been to the cement slides and I told him no – which ended up with him giving me a horrified look and he proclaimed that we must go. We hit a grocery store to pick up some wax paper to slide down on and stopped in a nearby party supply store to check out what (little) Halloween stuff they had in. We made our way across town to the cement slides. Let me just state that those things looked really shady and I thought for sure that this was asking for injuries.

Richard told me that you could either use a slick cardboard box or waxed paper to slide down the slides and we both opted for the box option since there were plenty strewn about from previous visitors. I decided to add another level of danger to my sliding adventures by attempting to hold my phone while holding the box and sliding down a cement slide. Luckily it all panned out. 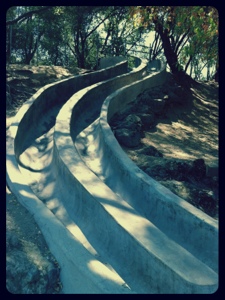 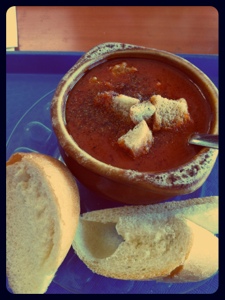 The cement slides and my delicious lunch at LaBou

After the cement slides we hit Fry’s Electronics to browse. Then to Dimple records where I was shocked that we didn’t walk out of there with a single thing. I attribute this partially to having stayed away from the used record section. That always does me in. After that we hit the 99 cent store to see what Halloween stuff they had (are you noticing a trend here?) We went across the street to LaBou for lunch. Everyone always rants and raves about how good this place is, but with its short daytime hours I can never seem to make it over to one before they close. Luckily we ducked in about a half hour before. I got a delicious bowl of tomato soup (pictured above) and Richard got a baguette and dill dip – man that was SO good. By the time we had finished lunch they were done with my car – so we went over to pick it up. Had a nice little scare on the way home because the shop DIDN’T SHUT THE HOOD OF MY CAR, so it started bouncing up and down as I was driving down the road – luckily I was able to pull off on a dirt shoulder and Richard jumped out and shut it all the way. JEEZ. After dropping his car off at my place we went over to Effie Yeaw to take in some sun and sit by the river. 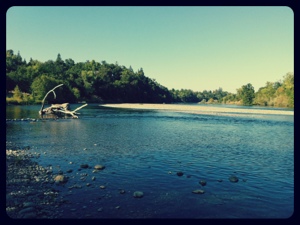 Looking up the river 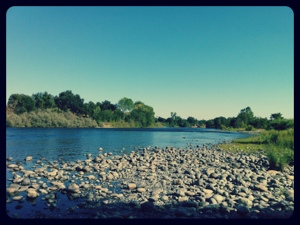 Looking down the river 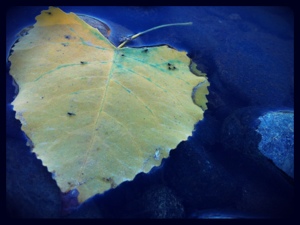 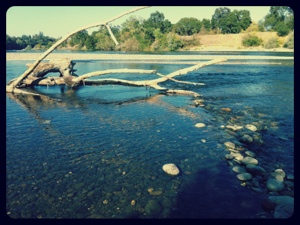 Neat branch and mini waterfall near where we sat 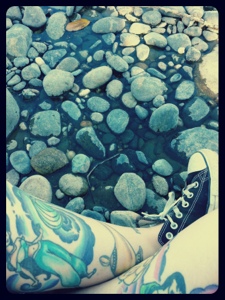 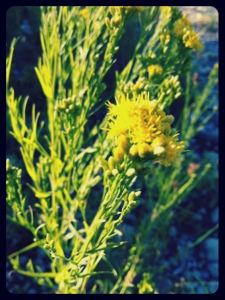 My legs and some pretty flowers behind where I was sitting 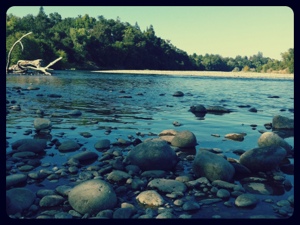 The view from my little spot in the rocks 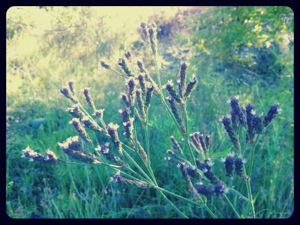 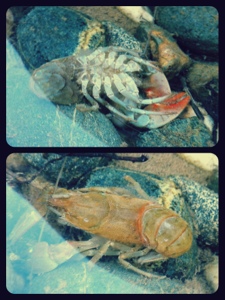 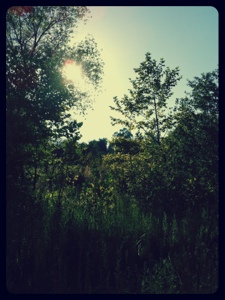 Dead crawdad and the view of the park behind where we sat.

It was nice to spend some time down by the river. It was perfect in the shade – We watched a guy trying to impress a girl by attempting to skip rocks and he fell down twice in the process by throwing them too hard and losing his footing. I did my best duck quacking at a couple of ducks and they came up to us. I like to think it was because of my quacks, but I’m pretty sure they are just overly humanized and were waiting for food from us. Richard spotted the crawdad pictured above in the water (it was dead) so I promptly got a stick to poke at it a little and flip it over to check it out. On the walk back to the car we spotted some dear and watched a little bunny chow down on some greens. He was beyond cute.

Out in the parking lot there was a large group of deer including one baby fawn. They got a little spooked by the people walking on the bike path and turned to head back out into the large field behind the parking lot. There was a U shaped fence around the section they were in and all of them with the exception of the fawn managed to navigate under a steel rope and back out into the field. The poor little fawn couldn’t figure out how to get around on the other side of the fence and was crying. Richard and I decided that we needed to give them a little help. He went to explore to see if the fawn could get to the group from the left side of the parking lot while I slowly walked closer trying to encourage him to walk to the right. Richard said that there was no access to the left so I started to make a large circle around to the left to push the fawn to the right – keeping my distance but close enough to get the fawn to move. He kept getting himself trapped in the corner of the fence and kept crying which was breaking my heart so I moved in just a little closer before he finally went all the way right and under the steel rope to be back with his group. Richard and I high-fived for good karma.

Did you do anything exciting this weekend?