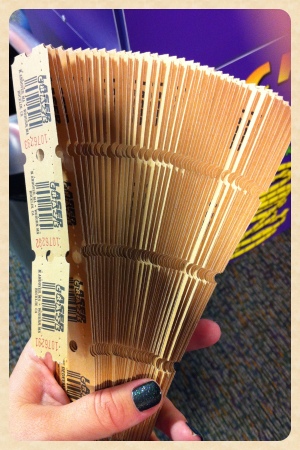 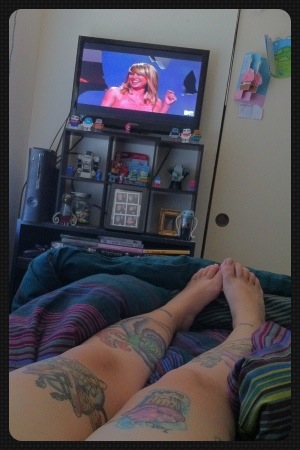 Okay, so technically Friday is not the weekend, but for the sake of argument we will call the portion after work on Friday, the weekend. So after a drama filled afternoon at work that required me driving back to the office after arriving home just to shut the office door that clicked open and set the alarm off, Richard and I were off to a movie! We (pretty much I) decided to see Snow White and The Huntsman. We arrived just as the 8:50 PM showing started and I hate walking into a movie when the previews start, it stresses me out beyond belief. We purchased tickets for the 9:55 showing and debated on how we were going to spend our time. Parking was an absolute nightmare, so we decided to venture over to the laser tag place next door to kill some time. The video game selection is really sub-par, but we were able to dump enough money into tokens to fill the hour before the movie.

I challenged him to a match of air hockey, where I promptly whooped his ass. I have an extreme soft spot for coin pusher games, and I may or may not have been known to drop mass quantities of money into playing them. They are seriously like crack for me. I managed to stay away – go me! – and we played a couple rounds on a game that allowed you to throw ball pit balls at a tv screen to accumulate points. We cleaned house and won a nice handful of tickets (as pictured above). I picked out a few trinkets and we retreated to the bench outside of the building to watch an amazing episode of Continue? on my phone. We were both recently turned onto Continue? by a friend of ours, and if you are a fan of older video games, boobs, profanity, and all things awesome, I highly suggest that you check out their channel.

Sadly Snow White and The Huntsman fell into the category where they show all of the cool awesome stuff in the TV trailer and the rest of the movie is rather throw away. The effects in the movie were really well done. I also really enjoyed the costuming choices for all of the characters. And somehow I just turned into a girl. AWESOME. Saturday was spent helping my friend Tim and his girlfriend move their apartment. Let’s just say I am still sore. You know how your parents say things like “we had to walk to school uphill both ways…” well that was pretty much moving on Saturday. At least I got to hang out with cool people, eat delicious food, and get lots of cute Xena snuggles (their cat!) Sunday, Richard and I ventured to A-1 comics – he spent a small fortune, and I was good and walked out with just one Adventure Time comic. We also ran into our friend Ed while he was playing in the Pokemon tournament. We decided to go to Toy Fusion but they are closed on Sunday – AHHH NOSE NUGGETS – so we wandered the mall instead. We hit the Lego store and drooled over the new Lord of the Rings series, Monster Fighter series, and the huge R2D2 build. I also may or my not have acquired some of the new Disney Vinylmation figures from the 25th anniversary series – I kind of want them all *swoon* We wrapped up the night by dancing our faces off at Asylum, our Sunday ritual.

Check back tomorrow for a brand new Edible Escapades!