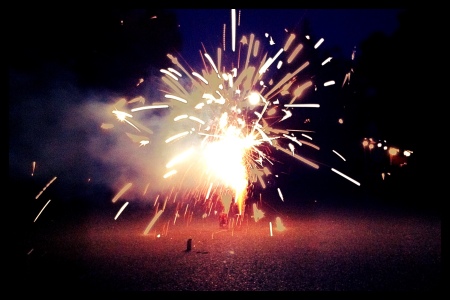 Happy 4th of July errybody! For the past 10 years or so, the 4th of July has been just another day to me, due to the fact that I have always had to work. But this year, thanks to working in an office setting, I have the day off! So look at me go. On Sunday, Richard and I bought a small arsenal of fireworks from a TNT stand (the picture on the left). We just love to set things on fire and couldn’t help ourselves. Normally we hit up both TNT and Phantom, but there was not a Phantom near my house. Today, Richard mentioned that he wanted to see if we could find one and check out what they had left. We went and had lunch and then spotted one near by. Sadly they had been really picked over (considering today was the 4th – duh.) but we did manage to pick up a few more things. (pictured on the right)

We saw one called Snakes in the Grass that they did not have in stock. Normally I would pass on buying something like this as it is probably just a larger version of the regular snakes we got as kids, but the advertisement piqued my interest and we set off to find another Phantom to see if they had any. Not far from the one we were originally at, we found another stand that had them in stock. We took a chance and bought them and a few other things. By then we had three bags of fireworks plus a large box, it was time to call it quits. On the ride back to Richard’s house, he looked at the Snakes in the Grass packaging and it said that it emitted sparks – so this got me even more excited that we did not just buy over priced snakes. Richard went to work and I… did nothing. And it was glorious.

We invited our friends James, Aaron and his daughter Angelina over to come hang out and blow things up in the street. One nice advantage to living in a cul-de-sac is that there is hardly any traffic on the street. When we used to set off fireworks when I lived in Los Angeles, we constantly had to stop to let cars drive by. Most of the fireworks that we set off were the run of the mill fountain with sparkly showers and what not. We did have a few sleeper surprises though. 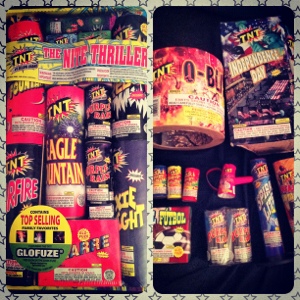 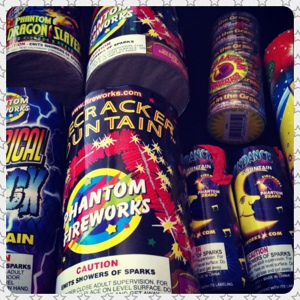 The first was the Snakes in the Grass that I have been ranting on and on about. DON’T BE TRICKED friends! This is just a large package of the old dumb snakes we used to get as kids. Talk about a let down! Normally when places like TNT and Phantom do buy one get one free items, they are mediocre items. We picked up some Phantom firecracker fountains – and no pun intended, talk about bang for your buck. These were rather entertaining and lasted quite a while, despite being 5 dollars. We will definitely buy these again next year if they are available. The next was Viva El Futbol. I’m not overly sure what prompted us to buy this, other than Richard just wanting it, but it was… interesting. It lasted quite a while, but at the end it blows itself up. Which scared the hell out of all of us. We also had another fountain that launched a HUGE spray of showers up into the air, and we were convinced that it was going to set us on fire. Last but not least was the Phantom Mystical Magic Fountain. The name really sold me on this one, but I honestly was expecting just a huge fountain of sparkles like the rest, but what the hay, give it a go. Much to our surprise it launched green, blue and red globs of color, which looked really awesome. My only complaint was that I wish it had launched them higher vs just kind of spilling out over the edge. I definitely want to get this one again next year.

Other than that Richard and James did really responsible things like trying to daisy chain those crappy little fountains that you get boxes and boxes of and throwing strings of Crack the Whip in the air trying to get them to explode mid flight. All in all we had over an hours worth of fireworks and a good time was had by all. Can’t wait to blow more things up next year! 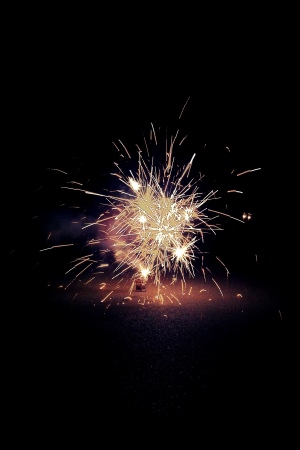 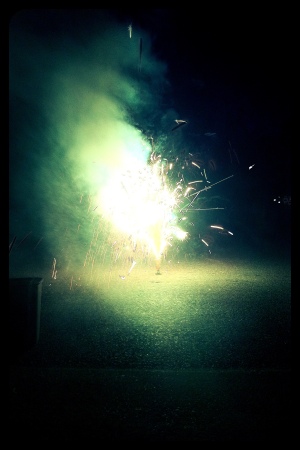