Posted in Edible Escapades by
pyropixie 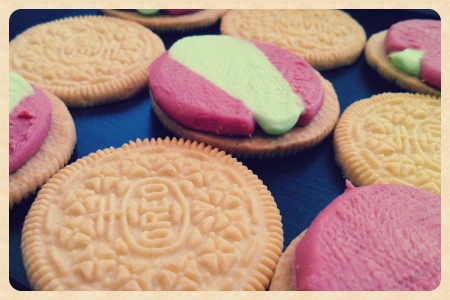 It’s no secret that Richard and I are total snack food junkies. Rarely do we walk down an aisle at a store and find something we haven’t tried, but that doesn’t stop us from looking. Last night during a spur of the moment dash to the Wal of Marts for today’s lunch, we spotted these little babies on an endcap. Snack foodie protip # 375 – always check the endcaps. Both of us have worked in grocery retail for a while (I currently do not anymore). Vendors will often either pay to be on prime endcaps or beg department leads for space for new product. Simply hiding it down the aisle doesn’t move units, thus rarely you see new product thrown directly in the home location from the beginning.

Richard and I love all things Oreo, and between the two of us, have tried every flavor that has been produced. You would have thought someone said there was one million dollars stashed inside of one of the packages if you had witnessed how big our eyes got and how quickly we both snatched up a bag last night. Richard was so excited that he even grabbed the wrong ones – sucker! Creamsicle Oreos for you! After grabbing a few other goodies in the store and perusing the toy department for anything interesting (which is almost just as bad as the junk food addiction, if you’ve read any of my previous Toy Thursday blogs) we headed out to the car. These babies didn’t even make it out of the parking lot before being torn open. Being the gentleman that he is, Richard offered me the first one out of the bag, and our conversation followed as such:

Richard: mmmmm…. this smells really good, I could smell this forever.

me: mmmmm… it smells really citrus-y.

me: *pops whole Oreo into mouth* The flavor is really underwhelming. (please note I said this with a mouth full of Oreo, always the lady).

Richard: Yeah I was expecting more of a sher-berty… taste.

me: the flavor is really light, like I could eat a whole bag and not even realize it vs. other ones that is so sugary the guilt sets in after #4 or so. At least they taste better than the Berry Blast Oreos. (note: I argued that the filling of the Berry Blast Oreo tasted fake, hi, has anyone ever looked on the back of the package? the whole damn thing is fake.)

Richard contests that golden Oreos are more of his preference because according to him “The golden cookies, are like a blank canvas, you can have a sugar cookie, or an orange cookie, or neopoloin cookie. Chocolate cookies already have a flavor to them and there is only so much you can do with the chocolate ones.” Then he proceeded to call himself a white pride activist. That last part is true in the sense that he said it, but untrue in the sense that he does not think that. He also prefers his chocolate items to be “moist”, such as cake, a candy bar, etc. Chocolate cookies are too dry dammit.*

*I may or may not have paraphrased some of that last paragraph. When he speaks, so much awesome comes out that I can hardly keep up on the keyboard, and this is why I keep threatening to record some of our conversations.

I prefer chocolate cookies myself. Give me the ole classic Oreo. Call me a creature of habit, but I will always go back to the old stand by. My package of Shure, Bert! Oreos will probably last me a week or two, but Richard’s on the other hand is probably already gone. If they were the classic version, I would have probably had the entire thing for breakfast, but instead I settled for honey mustard pretzels. Breakfast of Champions I say!

Conclusion: We would probably buy these again. And again…

Appearance:
Richard: 4/5 – looks well done, not messy and all over the place, appealing. would add another color to the frosting as the pink and green frosting is misleading, making you think that you are going to have a watermelon like treat.
Erin: 3/5 – i like the colors, but agree that the two colors does not give me the feeling of eating sherbet, where is the orange?!

Consistency:
Richard: 4/5 – very consistent with great taste. I don’t know. sure.
Erin: 3/5 – I prefer the cream in Oreos to be a little more firm so that when I twist them apart – my preferred method of eating Oreos, the cream stays on one side. When I twist these apart the cream will lift and trick me into thinking that its going to split in two, which totally bums me out.

Taste:
Richard: 4/5 – It tastes like sherbet, but I feel like the cookie dulls or takes away from the sherbet-y taste.
Erin: 4/5 – I agree with Richard that the flavor is a bit weak when combined with the Oreo. All alone its pretty delish.