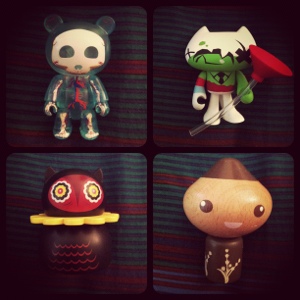 Happy Thursday ya’ll! Instead of featuring some of my already existing toy collection – I am excited to present to you my newest members of the family! The first is the Ice Blue Skelanimal Qee by Jason Freeny. The second is a Crappy Cat blind box figure (named Puked) by Unacat, designed by VanBeater. The third is a Jibibuts blind box figure (named Suii) by Nofern. Last but not least is a Misko blind box figure by Nathan Jurevicius. Sadly I bought two of these and managed to get doubles. Ohhhh well, such is the life of a blind box fiend.

After picking up and putting down the Ice Blue Skelanimal Qee, Richard was sick of me whining so he bought it for me. Being the medical nerd that I am, and my super secret love of all toys clear, I was excited to finally get to check this one out closely. I love all the detail that was put into the painting, my only qualm is that the little bugger will not stand up, so I must lean him against my display.

Originally I told myself that I would hold off on buying more blind box toys, save up and buy some larger figures for my collection. We can apparently see how that went down. My first purchase was going to be a larger Crappy Cat figure, but to my dismay, it was no where to be found on Saturday. Apprehensively I picked up one of the Crappy Cat blind box figures. I say apprehensively because the entire series is not completely made of Crappy Cat figures. They also have Flunk Monkey and M. Skull in the mix as well – and despite liking both of those figures, I really wanted one of the Crappy Cat figures. Alas fate was on my side (or the odds of probability) and I scored Puked.

The Jibibut was a spur of the moment decision. There were only a handful of them left, and I do not have any wooden figures in my collection. I can’t say I was very excited about the figure I got. Am I the only one that noticed that the sticker seal is misspelled?

Finally, the main reason why we went to Dragatomi. As I mentioned before, I lacked wooden figures in my collection, how did I manage to get 2 (technically 3, but I gave Richard my Misko double) in one day?! If you are unfamiliar with Nathan Jurevicius – he created Scary Girl. The art stylings of the game made me fall completely in love with it, not to mention that you get to buy vinyl figures in the game, how meta. These figures come apart and you can mix and match them. Non matching things stress me out hardcore – so these little hoots will be staying as is. Anyhoot, check back next Thursday for more toy-yee.. toyeee, toy goodness.