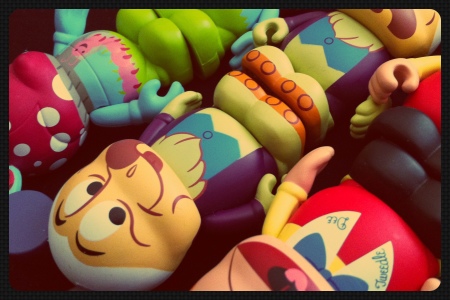 Hi all! I thought we would take a break from showcasing my collection to talk about a serious issue that faces all blind box collectors, DOUBLES. (was that dramatic enough for you?)

I think the main reason why I started collecting blind box toys was the element of surprise. I also admit, I really love to gamble. A lot. But I don’t, because I spend all my money on toys. There is something exciting when it comes to mulling over which box you are going to take (or bag if you are referring to Lego minifigs, which I also have a collection of). I would say it almost feels like Christmas morning when you are a kid. Does it rattle? Is it heavy? Compare and contrast with other boxes in the lot. As stated before, I am not a completionist. This applies to many aspects of my life such as video games, crafts, web blogs… wait. Honestly I blame it on being constantly distracted. There is usually one or two figures in a series that I want, but I also don’t usually get all gun-ho about trying to find them immediately. Usually I can find an open one online for a decent price, or lady luck will sometimes throw me a solid, that really sounds like shes throwing poop at me, and I will open up the one I’ve been lusting over.

I have purchased my fair share of blind box toys (well over 100 to date) and I can honestly say with the small exception of a mass purchase of Hello Kitty blind box toys when they went on clearance at Urban Outfitters, I am not often the victim of the blind box double. This is not to say that it doesn’t happen, as noted in my previous post when I purchased two of the Misko figures. Luckily I have friends who also collect and often just give them away, and in return I occasionally get their doubles. I would have to say that I have the worst luck with doubles when it comes to Lego minifigs. There are a couple from the series 6 collection that I have 3-4 each of, but despite my initial frustration (more comical than anything) it doesn’t bum me out nearly as much as when I buy higher priced doubles – think $3.00 vs $9.00-12.00.

I read an interesting 5 part article over at Jeremyriad recently about blind box toys. Little did I know that they were such the bane of peoples existence. I believe blind boxes fall into the same category as packs of trading cards and those awesome sticker story books that you had to buy tons of packs to complete. Sure the price tag is a bit more, but I still find that they fall into the affordable range. The element of gambling and surprise does it for me, but I understand that others prefer to obtain the piece they are looking for and move on, without shelling out dollar after dollar on other figures they don’t want. I enjoy the way that Disney handles their figures in that they have 3 (sometimes more if you ask) on display and you can trade any of yours for what they have. Is this financially reasonable for smaller mom and pop toy/art dealers? No. But sometimes it gifts me the opportunity to pick up an older figure from a discontinued series that I find interesting. For example, in the case of the Star Wars Vinylmation figures that are park exclusives, I didn’t return home to find that I had doubles, instead was able to trade them for other figures from the Star Wars series while still on vacation. I also really respect that the makers of the Ugly Doll brand decided to make their cases of blinds the entire series in one spot, instead of getting mixed cases and having to hunt them all down. I see that as a win win for everyone. It gives me the confidence knowing that even if I only plan on buying a couple, more than likely I will not end up with two of the same kind and for the die hard collector/completionists, they can simply purchase a whole case and have all of them. So I vote, bring on the blinds! I will continue to buy them as long as I find them interesting.

So friends, do you like blind box toys? Why or why not? Tell me about it!

Check back next Thursday for another edition of Toy Thursday. Rumor has it that I will be hitting my favorite place to find vintage toys in Sacramento, Toy Fusion, this weekend – and we know I can’t leave that place empty handed.