This weeks weekend recap is brought to you by the letter P and the number 3. I have never been to a midnight movie showing. Richard, James, his sister (who’s name escapes me currently), and I went to see Prometheus Thursday night/Friday morning. Wait. Let me back up. I had planned on taking a nap prior to going to see Prometheus because I am old and I was at a show late the night prior. LMFAO to be exact, and lets just get this straight, I was there as medical staff. After I downed half a pint of Late Night Snack ice cream by Ben & Jerry’s, I met up with Richard and Jonny for a little bit of geocaching. Sadly our first attempt at a find was a bust, but we snagged two more before Jonny had to leave and pick up his wife from work. This brings my official count up to 537 finds. Next month my friend Dawn and I are planning a 100 finds in a day extravaganza. We all parted ways and reconvened at Jonny’s place for some hang outs and Call of Duty a couple of hours later. After that we finally met up with James and his sister. We arrived at the theater rather early, just in case the line was long, and surprisingly they were already allowing seating in the theater.

I have mixed feelings about seeing movies in the theater. It never fails that I am stuck in front of some rude jackass that likes to put their feet on the back of my seat or kick the back, or the idiot that insists on talking the entire time. But on the flipside, there is something about enjoying a good movie in a theater. I think there was an entire high school class seated in front of us. I honestly don’t recall being so annoying when I was that age, because I probably wasn’t, but there are times where I wished that movies had age separations, like night clubs. The movie was exceptionally good, and the imagery was stunning, I would see it again. The only draw back was crawling into bed at 2:30 AM and having to be at work at 8 AM.

Saturday was spent catching up on much needed sleep. I got a good 12 hours in before Richard and I headed over to Toy Fusion. We saw our friends Jonny and Julie for a brief moment, sadly they couldn’t stay and hang out longer due to Jonny having to go to work – BOO! I picked up an awesome Ron English figure that I have been coveting for a while, and then we decided to go feed the ducks. We hit up the dollar store for some cheap bread and managed to buy a sizable feast of snack foods that ranged the gamut of tasty to horrible – more on that later. We managed to find a whole 4 ducks at the park to feed the loaf of bread we had to – poor guys ate like kings but will probably be stopped up for weeks. We then hit Red Robin for dinner and then hung out at my place where I slaved away on my Minecraft game. 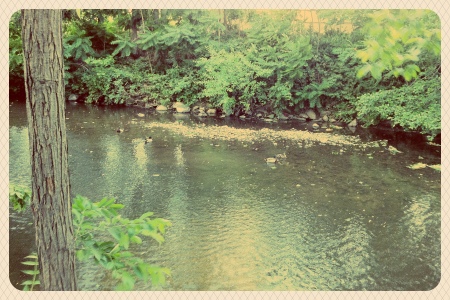 I assure you there are ducks in there – somewhere.

Sunday also got off to a slow start – both Saturday and Sunday I was nursing an excruciating migraine, which made me sadly decline hanging out with my friends Tim and Lauren. Richard came over and we decided to hit up the local auction, Denio’s. I honestly thought I was going to die from how bad my head was pounding. Nothing a little Italian food wont numb. We hit up our local Sunday pizza stop, where I foolishly deviated from my normal slice of pepperoni pizza and ordered spaghetti instead. What a mistake. Note to self – do not order that again – the marinara sauce was way too sweet. We then hit up Toys R Us where I snagged a game of Perfection, and Richard picked up 2 Lego games; Sunblock, which is a strategy game that requires you to place various sized umbrellas on a desert island until a player can no longer fit anymore on there, as well as Magikus, which is also a strategy game that requires each player to complete a potion list, but you can only draw items from the line that the owl is on. They are both pretty mindless, but fun, and being Lego allow for plenty of rule changing and customization. His new goal is to collect all of the Lego games. Maybe we can make a giant awesome game out of all of them. Truly epic. We wrapped up the weekend by hitting our beloved Asylum, where we got to hang out with our good friend Ed and dance the night away.