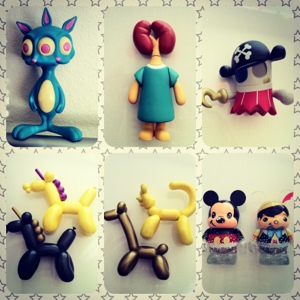 Hello hello! It’s Thursday so you know what that means – one more day until the weekend! Wait.. or toys, or both! All of these were recently added to my collection, so let’s get started!

Starting at the top left, we have my brand new (to me) Ron English Rabbbit figure! I have been eyeing this since the first time I stepped foot in Toy Fusion and finally broke down and bought it this past weekend. I absolutely love his style and who could not love this little blue fella? I was surprised to find that it is a hollow figure, which makes me less leery of putting it ontop of my toy display – as its only about 3 inches or so wide. Bonus footage! Check out Techno Kitten on the Xbox 360 (epileptics beware, this game truly is almost seizure inducing) to see some of his work! And play one of the most frustrating games ever.

Next we have my fancy new Organ Donor figure. This figure is a bit taller than the rest of my blind boxes at about 3.5 inches tall. I honestly have never even seen these before, my awesome friend Jeff was nice enough to send me one. I opened the package to find a lovely set of kidneys staring me in the face. Original concept created by David Foox, there are 24 variants to this series which came out in 2009 or so which include various body parts such as eyes, brains, livers, lungs, etc. This series of figures was also created on the premise of raising awareness about organ donation. Kind of a nifty deal. I also super like that the backside of the toy has its little buttcheeks showing, as I’m sure anyone who has donned a hospital gown can feel that pain.

Top right corner we have a figure from the BoOoya series by Kid Robot that came out in 2009. This dainty little guy is an awesome addition to my collection, and some how this series slipped right past my radar, my guess is because I didn’t start heavily collecting until about a year later. His hook hand is my favorite part and if it wasn’t completely awkward I would probably carry him around in my pocket.

Bottom left and middle we have a few figures from the Pop! series from Kid Robot. These are new to my collection, but I have quite a few other pieces. I occasionally pop into Urban Outfitters when I hit the mall and happened to find these guys on sale ontop of the clearance price, making them just a dollar a piece. What a steal! I picked up 5, despite my brain telling me to just grab the entire lot full that they had. Fortunately combined with my existing collection, I did not receive any doubles, what are the chances? My guess is because of the previous article I wrote about doubles in blind box toys. Toy karma to the max!

And last but not least, we have two figures from the new Disney Vinylmation 25th Anniversary series that just hit stores. I am a total sucker for clear vinyl, and glitter, because I am a girl and we like shiny things. Let me rephrase that, I am human and we like shiny things. I picked up two just to check them out. There is also a Mickey open box figure that comes with a light up base that you can interchange between the figures that will make them glow. Pretty fancy, but as many die hard Disney fans will choke and die, I’m not a huge Mickey fan. I wish they sold the base separately. The Mickey I received in the blind box is different from the open box figure. There are only a couple figures in this series that I really want, the first being the Tinkerbell one, and the second being the chaser figure which is the hippo ballerina from Fantasia. I am sure I will probably pick up a few more before the series is discontinued or maybe I’ll get lucky and trade a couple of my doubles for something from the series at the Disney store.