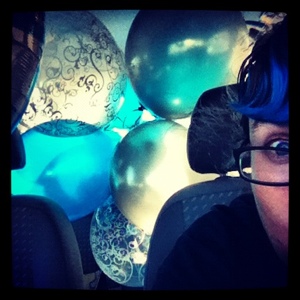 Attacked by balloons in the car!

It’s that time again for the weekend recap!

Friday night was spent at Shenanigan’s for the final night of Club Circuitry. Normally we only frequent Asylum, but once a month our friend Adam and his wife Ashley throw a goth/industrial night at a local bar. Its a nice change from the Asylum crowd and the DJs that spin there play a vast array of music vs. the pretty standard set list at Asylum. I got to dance my heart out to Joy by VNV nation, which was the highlight of my night, and Richard tore it up all alone while I got water to some old Ministry. Can’t say I’ve ever heard either played at Asylum, which was really nice. It’s sad to see this night go away. Apparently on the 29th it is going to be a retro night at Asylum, so we shall see what comes out of the woodwork musically.

Other than that, for the last week or so my life has been  pretty consumed with work and coming up with ideas for my roommates bridal shower. Each of us (and some of her family and grooms family) took on various portions of putting the party together. I volunteered to take on the decorations, because.. well I am foolish. Silly me, I thought not only could I whip up a few DIY things to cut down on the cost, that it wouldn’t take too much time to do. WRONG.

Not only did I wait til the last minute to finally come upon some inspiration for her shower, I came up with ideas that weren’t exactly easy (or cheap) tasks. After scouting around for ideas on things to create, I stumbled across the website Oh Happy Day! 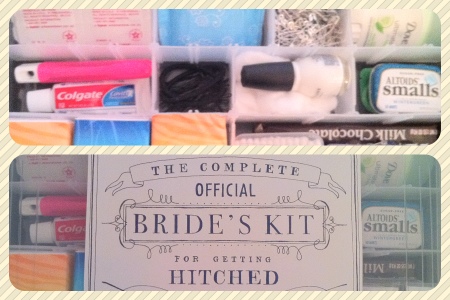 I think the hardest part about creating this on the fly was trying to find a decent container that wouldn’t need much modification and didn’t cost a fortune. I had a couple ideas but I pretty much just ran out of time – a quick trip to Home Depot solved my problem and I picked up a small nuts and bolts organizer for 4 dollars. I printed the label on a sheet of adhesive paper – filled it with goodies like a toothbrush, deodorant, tissues, etc. It was a hit!

While I was out I picked up a menagerie of party items like sparkly centerpieces, balloons, streamers, etc. I also created handmade bunting that said “Bride To Be” which came out smashingly. It was my first time using an exacto knife to cut out small little letters, and for the most part, it wasn’t too infuriating. 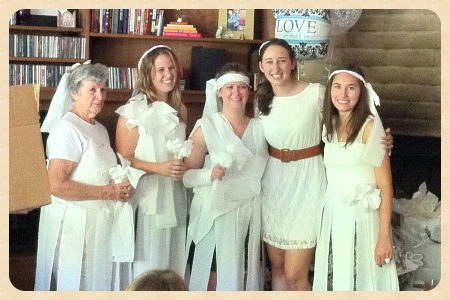 All of the toilet paper dresses and the bride to be.

We played a couple games such as breaking into teams and creating wedding dresses from toilet paper, how much do you know about the couple, a mad lib, and a game where we were each given 3 clothes pins and if we said bride, groom, wedding or married we could take the persons pin. I did well in that no one stole my pins, but I didn’t do so hot about stealing others.

As party favors the mother of the bride put together small little pails with Hershey’s kisses and the laminate I created. It looked really ace. Sunday was low key and Richard and I spent the evening playing a new Lego game we bought, Plank, and Tetris Link, which is a Tetris based board game. Its a combination of Tetris and Connct 4 (sort of) and its a lot of fun. Also when not in use, makes a nice little nerdy display piece.