Posted in Uncategorized by
pyropixie 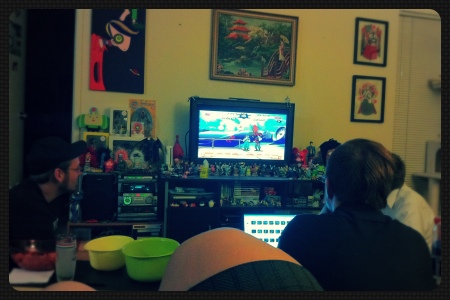 Hi everyone! How was your weekend? I can’t believe somehow Monday slipped by me and now we are closing in on Tuesday evening. Friday night was spent over at Jonny and Julie’s place for an impromptu bar-b-que at their place. It was mostly spent noshing on chips and watching the guys play Donkey Kong and Street Fighter on the Nintendo 64. I tried my hand at Street Fighter, which I have only ever played in the arcade because I never had a 64, and was accused of button mashing. Talk about a sore loser! 😛 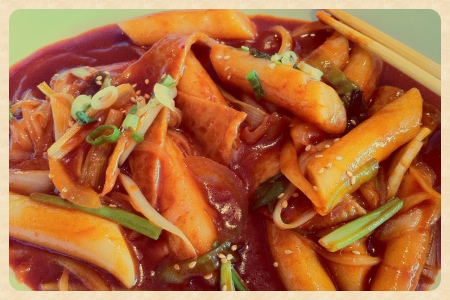 After catching up on some much needed z’s, and a little Minecraftin’ I headed over to Tim and Lauren’s place for lunch and hang out time. After debating quite a bit about where to eat, mostly because I am not an adventurous eater, we settled on a place called Bowl & Ramen in Sacramento. I used to live near the area but had never eaten there before. Let me just say again that I am not an adventurous eater, so it took me a couple of reads of the menu before settling on something that I figured would be relatively safe to order. I ended up ordering Tteok-bokki + Gunmandu 떡볶이+군만두 (Rice cake simmered in spicy sauce and fried dumplings ) which is pictured above and below. I was not expecting the rice cakes to be so large (maybe about the size of a nickel in diameter?) but they were extremely good. They had a similar consistency to mochi, which I’m not really a fan of, but it was not nearly as gummy. The general consensus was that I ordered the best dish of the afternoon, because what meal is not complete by sampling each others food? I would definitely go back again and have this tasty dish. 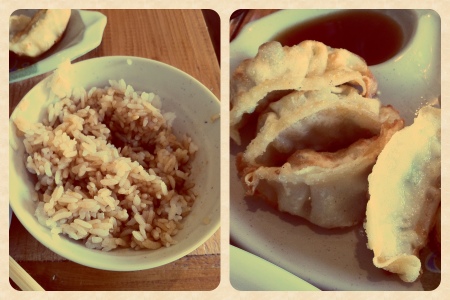 After saving a little room for dessert, at least thinking I did, we were off to a European bakery that I had never been to before called Ettore’s. We made a slight detour before and stopped a local pet store so Lauren and Tim could check out the cats. They are looking to get a little brother or sister for their lovebug Xena. After prying the cats out of Lauren’s hands we were off! I must admit, it was hard to not take one of those cute kitties home, but alas, I already have 2 at my Mom’s place and my current living situation would not be conducive to bringing in a furry feline friend. When we walked into Ettore’s, the place was packed. I was like a kid in a candy store with all of the delicious looking confectioneries they had. It was downright cruel to be made to choose just an item or two. Tim picked up a handful of lemon macarons and a pistachio macaron – not a macaroon! – Lauren picked up a piece of the raspberry crumb cake, I picked up a black on white fudge truffle type thing, a chocolate macaron, and a milk chocolate and white chocolate chip cookie, and we got a small salted chocolate caramel tart to split. We all had a our respective plates and tasted each others treats, all of which were divine. I was ready to call uncle when we got to the salted chocolate caramel tart because I was way past full, but how could I pass that luscious beauty up. It was honestly a little slice of heaven, and I’m glad it was only one forkful, as it put me over the top. 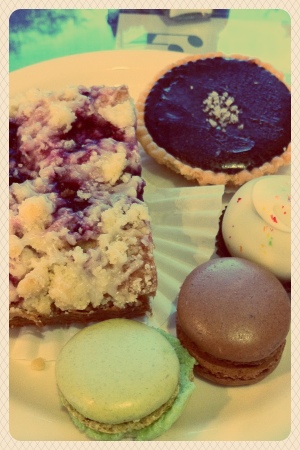 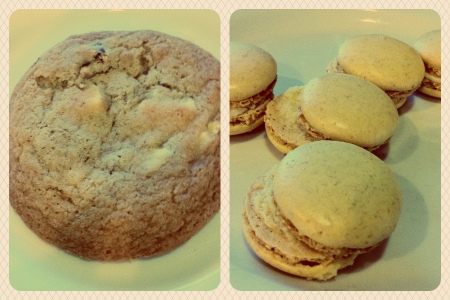 We somehow managed to make it back to the car without wheelchairs and vegged out on the couch to play some Xbox 360. We started off by playing some Scott Pilgrim where I noticed a subliminal Continue? and also a cool toy for me that I will be sharing on Thursday! After that we hit Mel’s diner and had dinner. I was still extremely full from my lunch with Tim and Lauren so I had a scoop of ice cream and french fries – totally healthy, right?!

I spent most of the day Sunday in bed playing Minecraft and half watching the new season of The Office. After Richard got off work we hit A-1 comics where I managed to buy not a single thing, and then the Sunday ritual of pizza (not spaghetti like last week!) at Celestino’s and Asylum.

Out for a walk