Well hello friends and… friends? I would say family, but I am almost positive that my family has not discovered my blog. It is probably for the better or something. Anywho… My weekend was actually pretty low key for once. I mean, don’t get me wrong, they are always pretty low key, but I wasn’t all over the place, I mostly just hung out at home. On Saturday I went to Target to meet Richard for lunch. I also got to catch up with a few people that I used to work with, so it was nice to see them. Other than that, I spent most of the day sucking my life away playing Minecraft on my XBox 360. Later that evening we had a birthday party at our house for my roommate Sam. It was a nice mixture of people that I haven’t seen in a while, mostly due to the fact that we have not been working many concerts lately. While hanging out on the couch, Dawn and I both got notifications that a new geocache had posted. Lately I haven’t really done much caching, mostly due to having no one to go with, so when Dawn asked me if I wanted to go and try to get first to find, of course I agreed. Honestly I love the rush of trying to be the first person to discover the cache. We told Sam that we would be back soon and headed out to try and make the find. Of course where the cache was hidden, there was NO parking to be found. It was along the sidewalk of a busy street with no street parking, so we had to park in a neighboring housing area and make the trek on foot.

We walked quickly to the cache location – because every person you see and every car that drives by suddenly becomes competition – and began our hunt. The anticipation of opening the cache with hopes that there is a fresh blank log is what makes FTF hunts for me. Low and behold we were the first ones there. After a brief internal victory dance, we inked the log with our names and by then another cache had posted, and another, and another, and another, and another… We looked at each other and decided to grab the others. How could we let the opportunity pass us of getting 4 more first to finds? Long story short, we were able to snag all of them and we headed back to the party. Of course once we got back to my place, another had posted, but we decided to let it go. We did however find that this was good practice for our upcoming task of finding 100 geocaches in a day.

Sunday was spent mostly lounging around at my house, waiting for Richard to get off work. He came over and we played his new Lego game Heroica: Ilrion. This game took longer to build than it did to play but it was fun. I would like to get the other sets in this series and put it all together and play on a huge board. After that we decided to partake in our Sunday ritual of pizza and Asylum. This week we decided to try somewhere new (to me) for pizza. 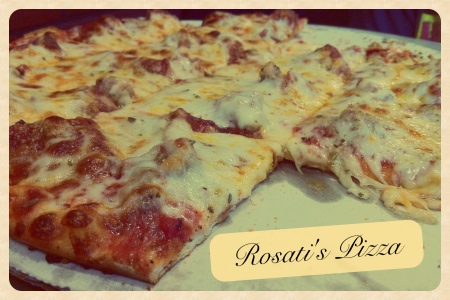 Richard has mentioned Rosati’s Pizza more than once, and I suggested that we try it out instead of our old standby Celestinos. It is a mom and pop shop which I love because not only is the service usually better but the food tastes MUCH better. We ordered a medium pizza and garlic cheese bread. Now, I don’t know why I ever bother ordering garlic bread of any kind. I LOVE garlic. Like really love it. Like when we got to Mongolian places they have to clean the grill top before cooking others food because I put so much garlic on there, love garlic. So ultimately I am always disappointed with 99% of the garlic bread I get anywhere. This was no exception, but it was still good. Our pizza arrived quickly, which was nice because I was ready to gnaw my arm off. Richard mentioned that they cut their pizza in squares (Chicago style) and we had a brief debate prior to arriving about why this is a good or not good idea. I vote that the center pieces suck merely because I hate getting my fingers covered in molten hot pizza sauce and I am always forced to use a knife and fork to eat the pizza. Alas, this is exactly what ended up happening – but it was still very tasty, I would go back again.

After that we parted ways to get ready for Asylum. Another club had decided to do an all white goth night and our friend Ed decided he was going to wear white and try to get as many people as he could to as well. Richard and I agreed that we would try to put something together, but when he came over and I opened the garage to head out to the car, we both laughed when we saw each other clad in all black. My excuse is that I don’t own any white clothes and I am sticking to it 🙂