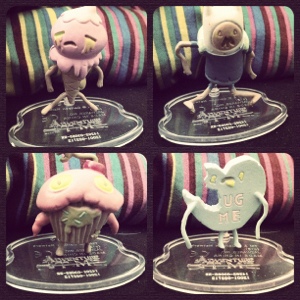 What time is it?! ADVENTURE TIME!

Every time I convince myself that its a good idea to wander around Toys R Us (protip: it’s never a good idea) I always have to check to see if any new Adventure Time toys have come out. Honestly if you had asked me after I watched my first Adventure Time episode if this was something I would be into, I would have looked at you like you were a complete crazy person. Let’s just say I am a little obsessed now. I am also surprised how this is really deemed as a kids show – as I am unsure if I would let my younger child watch it, but then again, it’s not like it’s Super Jail. ANYWAYS – back to Toys R Us. I was delighted to see that they were coming out with new figures. There are 3 sets in this series, two of which I have yet to find which leads me to believe they haven’t been released yet. This set is the Undead People pack. The other two are The Candy People Pack and the Fionna and Cake pack. They glow in the dark, which I have yet to witness mostly because I am staring at the inside of my eyelids when its dark and they are tiny, which makes it easy to tuck into my huge display of toys. The only qualm I have is that they seem to be a bit poorly made. Finn doesn’t want to stay on his plastic holder, so I have to use the utmost care when moving them around or they fall to bits. Despite that I think they are totally mathematical and I can’t wait to get my paws on the other sets.

Until next week friends!

Everything small is just a small version of something big! I understand EVERYTHING!